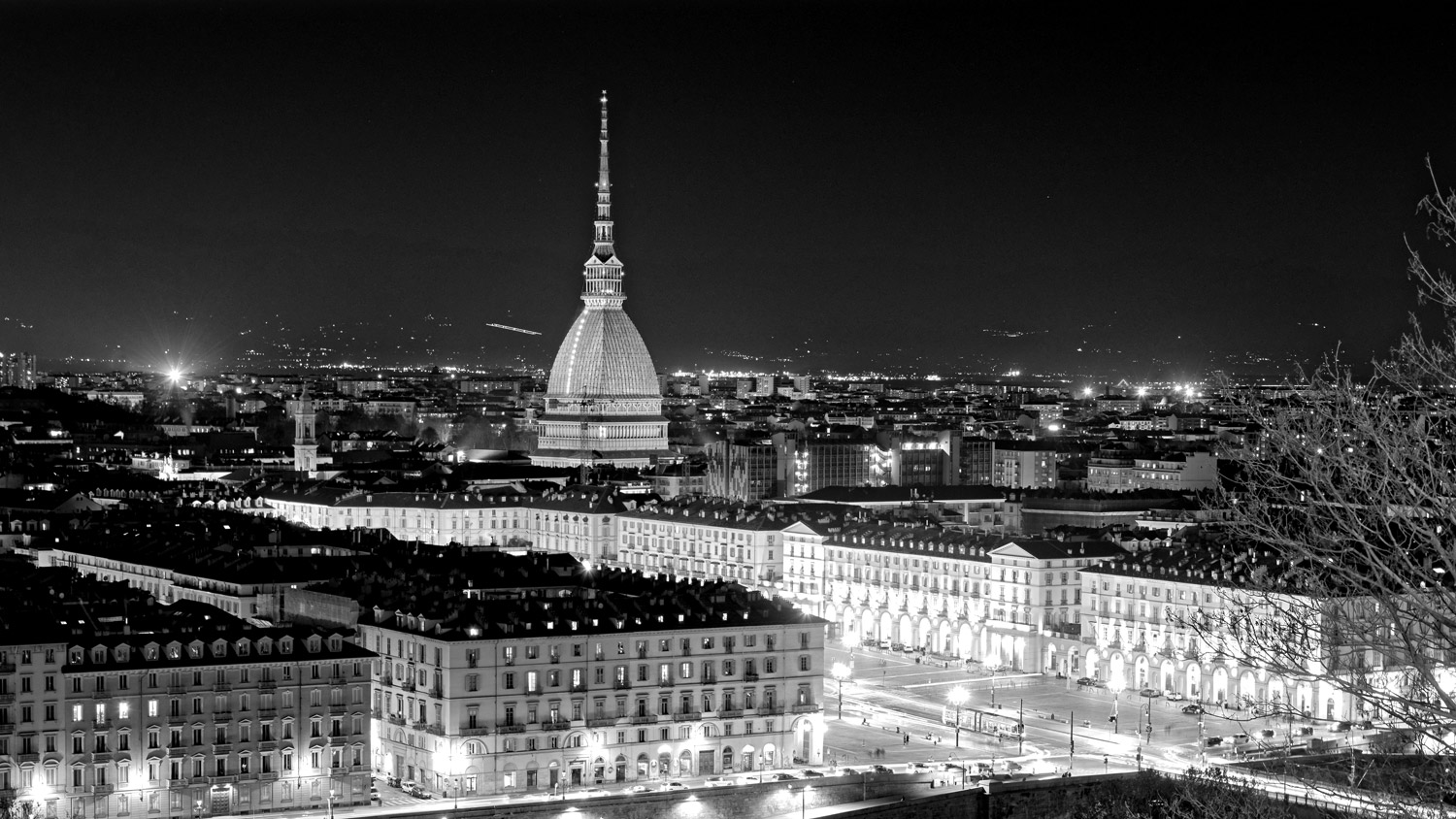 Torino is astonishing at first sight! Surrounded by the Alpes, Torino is enclosed between smooth hills and the Po river, and it expands with a squared texture, urban heritage of the first Roman settlements. Indeed, Turin boasts a long history and has always been able to re-invent itself: from the historical Roman settlement to the first Capital of the Italian kingdom in 1861, from the industrial identity with FIAT development in the 1950s, to a popular touristic destination thanks to the 2006 Winter Olympic games that put the city under the spotlight.

Torino is rich in architecture, first of all its squares: Piazza Castello with the Royal Palace and the Facades of Palazzo Madama, the 18 km of elegant urban arcades that link Piazza San Carlo - the sitting room of the city- to Piazza Vittorio Veneto, one of the beating hearts of the town at Aperitivo time. Walking in the city center you will discover the Mole Antonelliana, symbol of the city, which stands out in the city skyline, the open market of Porta Palazzo, apparently the largest of this type in Europe; the 19th century galleries like Galleria Subalpina and Galleria San Federico; the historical theaters such as Teatro Carignano, called la Bomboniera (the wedding favor) and the Teatro Regio, the elegant opera house designed in the 1960s by Mollino, and its many famous museums like Egyptian Museum ( only second to the one in Cairo), the MAO (Museum of Oriental Art), the Museum of the Automobile and the Cinema Museum, a real jewel encased in the Mole Antonelliana.

Torino knows how to make life sweeter! Since the early 17th century, Turin has been synonymous with chocolate and this is reflected in its historic coffee houses where chocolate delicacies and special coffee blends are served in charming period settings. At Caffè Mulassano, Al Bicerin or Baratti & Milano, you are transported back in time through the largely unchanged Regency, Baroque or Art Nouveau interiors.

And if Torino is not enough for you, there is a lot more in the surroundings! Between 16th and 17th century the Savoy dynasty designed a network of Maisons de Pleasance in the Piedmontese territory, the so-called Corona di Delizie (Chrown of Delights): 11 wonderful Royal Palaces around Turin. Among these la Reggia di Venaria Reale , declared a World Heritage Site, is a must to visit.

Do you wish to go a bit further out? Perhaps a trip across historical villages, vineyard landscape and the kingdom of food and wine? Than you can’t miss Langhe and Monferrato areas, awarded by UNESCO for their unique scenery, where you will taste the renown Piedmontese wines (Barolo, Nebbiolo, Barbera, Barbaresco, Grignolino, Ruché, Dolcetto), the typical cuisine and - her majesty- the Truffle!

What you are waiting for?
Next Summer join Caras de Tango and take the chance to visit Torino!

Join us for a Cafe Crawl as we taste our way through the special historic cafes that have been around for over 200 years!

Stop 2
Ice Cream at Caffè Gelateria Fiorio
Via Po 8, 10123 Torino
Opened since 1780 and frequented by Savoy nobility. The specialty ice cream is gianduia, a mix of chocolate and ground hazelnut.

Stop 3
Caffè San Carlo
Piazza San Carlo, 156 - 10123 Torino
Opened since 1822,this cafe is famous above all for its fine coffee blends. The environment is opulent, furnished with stuccoes, statues and precious marbles. In the evening it turns into a restaurant.

Stop 4
Hot Chocolate at Baratti & Milano coffee confectionery
Piazza Castello, 29 - 10123 Torino
Opened since 1875, known to have the best hot chocoloate in Turin. It’s success was such that it became the supplier of the Royal House.

Stop 5
Sandwich at Mulassano coffee
Piazza Castello, 15 - 10123 Torino
Opened since 1907 this was a regular meeting place for the Turin nobility and artists of the Teatro Regio. Among the splendid mirrors, the marble tables and the many decorations you can enjoy a sandwich, the specialty of the place where this dish was born.

Stop 6
Pastries at Caffè Platti
Loyal customers of Platti coffee in Turin, opened since 1870, were Luigi Einaudi and Cesare Pavese. Still a nineteenth-century setting for this historic venue and many Turin specialties including corn flour pastries and obviously gianduiotti.

Torino is located in the heart of Piedmont (Piemonte in Italian) in the north- west of Italy. This region is the birthplace of the slow food movement so you can’t go wrong with finding something fantastic to eat or drink. In Torino, you should try to visit a Piedmontese “Piola” which is the small traditional trattoria where you can taste really great food at unbelievably fair prices.

Can we suggest some of the best original Piola in Torino?